Rob Verhelst, better known as “Fireman Rob”, is a hero. He’s the sort of hero that you wouldn’t suspect: humble, soft spoken, but strong nonetheless.

Already an airforce veteran, Rob became a firefighter. He was 23 years old when 9/11 occurred.  He finished a shift at his firehouse in Madison, WI and went straight to ground zero, where he worked search and recovery for 8 straight days.

Changed by the experience and in the memory of those who lost their lives in the twin towers Rob decided to do something. He started racing Ironman. But it was on the 10th anniversary of 9/11, at Ironman Wisconsin, Rob Verhelst became “Fireman Rob.” It was there that he partnered with Code 3 for a Cure and he completed the marathon portion of the event while wearing his full 50 pound firefighter’s gear.

Once would have been inspiring, but Rob didn’t stop. He saw the change in people he met through his actions and the “fireman Rob” persona. He has since completed 9 more full 140.6 distance events, including Kona, to raise funds and awareness for Code 3.

I had a chance to talk with Rob Verhelst recently:

You’re former Air Force and now you’re a career Firefighter. You’ve made a lifestyle out of serving others. Tell us about your service.

With having both parents as teachers and raising me to understand the importance of helping others, I have always had the sense of service in my mind.  In life everyone has a purpose or calling and I have also been drawn to helping others and pushing myself beyond my comfort zone to do that.  Being part of something bigger than yourself is something I try to carry on to my children though more action than words.

You served at ground-zero after 9/11. How did that change your perspective on life?

9/11 was a profound moment in the lives of many people in the United States and around the world.  Performing search and recovery there for eight days provided a new perspective on what is important in life and how it is important to make sure to take the positives from a traumatic event of this magnitude.  It took a long while for me to turn this moment in my life into something that could change it for the better.  Eventually I gained the perspective that you get one chance at living your life to its fullest and whether you get one day or ten years more, each day you need make the most of.  Hug your kids, try something new, inspire others, find your passion, love, and most of all appreciate.  You can let moments like this define you or you can define what it means in your life.

How did you get involved in triathlon?

When I was 10 years old I competed in my first triathlon in Wisconsin.  I ended up third after starting last with a pool swim.  I have been around competitive sports since I was young, competing in swimming, college basketball, college water polo, javelin, road races and triathlons.

In 2003, I reentered the sport of triathlon and found the passion for competing against yourself and finding what is possible.  Triathlon offered the opportunity to still be competitive, yet grow as person in finding out what about myself and what is important.

You did some Ironman racing before the suit. It’s kind of like KISS in reverse, right? Make up to no makeup. You went no suit to suit?

It is something I have always done in my life, in trying to push the limits of what is possible.  The one thing that I was always looking for, in these competitions though, I found once I started doing them in gear for a cause and purpose.  It is a great accomplishment in itself for people to finish Ironman, yet when you can put a cause to your passion and challenge; it makes the journey that much more.  You can actually say that in taking on the challenge of doing these in the fire suit, I found the essence of Ironman for myself in the preserving for others in need and inspiring others to do the same for their respective causes.  The cycle of inspire and be inspired is the essence of Ironman and once you get to experience that feeling, it brings you back in no matter how painful the day was.

What gave you the idea to race in your firefighter’s suit?

The idea for doing Ironman in the firefighter uniform came when I signed up for doing 2011 Ironman Wisconsin which was to be the 10th anniversary of the events of 9/11.  I wanted to do something to pay respect to those that lost their lives that tragic day, as well as help people remember the resilience and strength Americans showed after these events to help us recover.  Along with this cause I wanted to do it for a foundation and found Code 3 for a Cure Foundation that help firefighters and their families dealing with cancer in many ways from personally to financially.

My test race was Ironman 70.3 Race in July of 2011, in which I only told the race director what I was going to be doing.  It turned out to have heat indexes of 100 degrees that day testing my will and strength to complete this.  I also dedicated that race to a firefighter by the name of Kevin Oldham, who died of pancreatic cancer, leaving behind a wife and two little girls.  He also gave me the strength to preserve through the race and finish in a manner fitting of the message, strong.

What’s it really like to be out there wearing that heavy gear?

It is actually my favorite part of the race since I get to meet the most inspiring athletes when I am on the course at the back of the pack.  The gear has become part of racing and I don’t remember what it is like to race without it.  It definitely makes the races more challenging but if I can inspire others and help others find their passion then it is worth it. 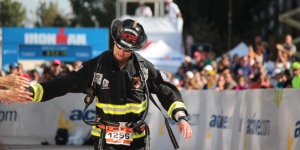 How do you train for that sort of heat?

The heat is like any other obstacle on the course you encounter, which throughout the day you have to overcome through mental strength and confidence in your preparation.  You can only train to be prepared for the distance and above that you have to confidence and mental strength to endure challenges the day brings.

Some training I do to help prepare is called tolerance training.  I do most of my running with a weight vest and plastic top to keep the heat in to challenge myself with each workout both physically and mentally.

Are there times when you want to quit or at very least take that stuff off and a be “normal” triathlete?

I would not be honest if I didn’t say during the races that I have low moments or quit moments.  This is a common thing for every triathlete and is a large part of what makes this event a challenge and large accomplishment.  During those moments of doubt is where it is important to remember who helped you get to the start line and what or who the journey and accomplishment is for.

My motto is “Your strength is in your passion.”  I truly believe that if you have a goal and a passion behind it, your mental and physical strength will help you endure anything that you challenge yourself to.

The body achieves what the mind believes.

Tell us a little more about Code-3 for a Cure.

Code 3 for a Cure Foundation (C3FC) is a nonprofit 501(c)3 public charity organization.  Like most worthy causes, C3FC was formed because of one person’s struggles. Firefighter/ Engineer Lorenzo Abundiz (Santa Ana, California, USA), a 27-year veteran of the fire service, was first diagnosed with cancer in 1998, forced into an early medical disability retirement in 2001, and since then has been diagnosed with two other cancers.

As Abundiz lay in a hospital bed at USC Medical Center in Los Angeles recovering from kidney surgery on March 12, 2006, he was inspired to do something to help other firefighters who are going through similar struggles. Out of that moment grew Code 3 for a Cure, an organization formed specifically to help firefighters who are diagnosed with cancer and their families, as well as select nonprofits that are helping fight the war on cancer.

Code 3 does a few things:

2. Assists active and retired fighters diagnosed with cancer by providing them with referrals to other nonprofits.

You’re also a father. Tell us about your kids and what you hope they’ll take away from their dad’s dedication to serving others.

Being a father and step father is the most important part of my life and as a dad I want to not just tell them about life, but show them.  Avery is 10 years old and did her first triathlon last year and is a compassionate step-daughter with an incredible passion for horses.  Payton is 7 years old and is a creative, athletic step-daughter who lights up a room. Noah is my 5 year old son who has an energetic personality and loves to be part of helping others also.  He did his first triathlon at age 4 and continues to try every sport he can.

Our kids help motivate me every day to inspire others and continue to do this to have them see the best of what this world has to offer.  I am a firm believer that showing your kids what is great in this world and making it a part of who you are, creates a positive, confident environment for your kids to succeed.

My soulmate, Nicole, makes me as a person better and as a family we believe in creating the most opportune and loving environment for our kids to find their passion and shoot for their dreams.  One of my favorite quotes is “Family isn’t always blood.  It’s the people in your life who want you in theirs; the ones who accept you for who you are.  The ones who would do anything to see you smile and who love you no matter what.” –unknown.

The three things I want to have our kids come away with from these events are:

1. Inspire others and be inspired yourself

2. Failure is only the next step to success, learn from it and move forward

How does triathlon in particular play a part in those life lessons?

Triathlon is a sport that has long been thought of as selfish, yet it can be used to help you find who you are as well as deliver a message on what you are passionate about.  Triathlon can be your outlet to a new part of you and open up your dreams to things you never thought possible.

What was on your mind when you crossed the finish line in Kona last year?

To tell you the truth the finish line at Kona was really a blur and it was the journey throughout the day that truly made it amazing.  The best part of the finish line in Kona, was my family being there and the pride on their faces.  The day in Kona took every ounce of my strength to keep going and without the love and support of my family this day would not have happened.

My Kona experience was summed up by the attached picture of Nicole and I embracing, allowing the emotions of this day and year come out.  Nothing in this sport of triathlon for me can be accomplished on my own.

You can keep up with Rob Verhelst on his website HERE.

← Across the Threshold: 140.6
How Revolution Changes Everything →