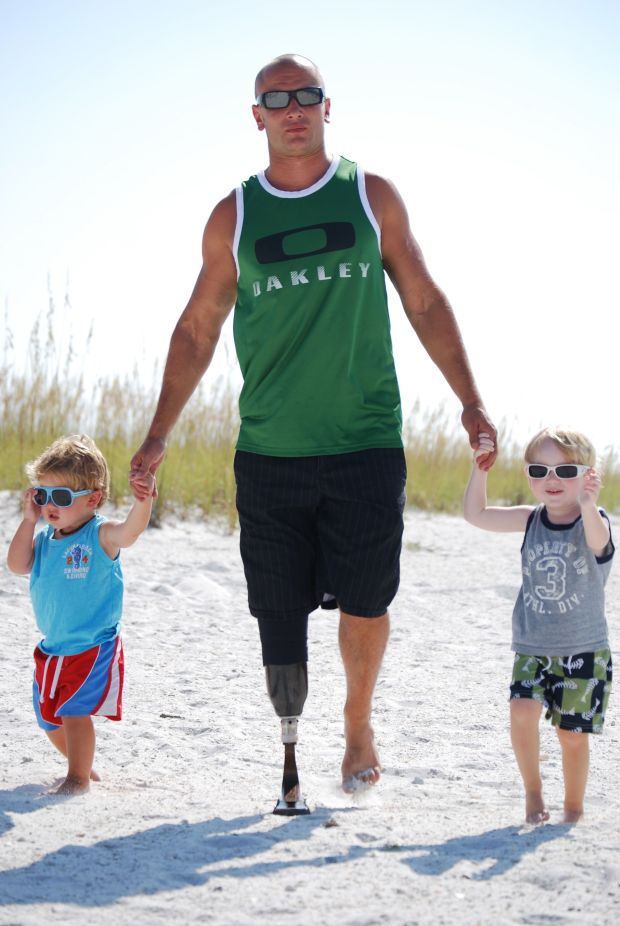 I have met and talked to a lot of interesting people over the years of my involvement in triathlon. Some of them were and are athletic heroes of mine. Others inspired me to be a better person. Recently I met Joe Kapacziewski, a hero in real life and was left in awe at both his drive as an athlete and his passion for life in general.

Joe “Kap” is a soldier. He is a member of the 3rd Battalion of the Army’s 75th Ranger Regiment. The unit is the longest serving force since combat began post 9/11. These are tough men and women. But Joe Kap may be the the toughest of all. Though he would never tell you that.

Kap was wounded by an enemy grenade in Iraq in 2005.  His leg was severely damaged. In 2007 Joe  opted to have the leg amputated – because the likelihood of returning to active duty, and combat, was greater with a prosthetic than with what was left of his leg. Since then Joe has served 5 tours, earned the Army commendation medal with a “v” for Valor, and 3 purple hearts. He is the first service member to fight in a combat zone with a prosthesis. You don’t meet many people like Joe Kapacziewski.

But Joe Kap is humble. He’s Army through and through. His life is about service.

About being a solider and seeing the war through Joe simply says “We made a commitment.”

Read this USA Today article on Joe for more detail about Joe’s story: “Despite loss of leg, Army Ranger back in the fight”.

On top of everything else, Joe is also an athlete. The former high school wrestler is now a triathlete. He has won his division in the Army 10-miler on two occasions. That’s hard to do. 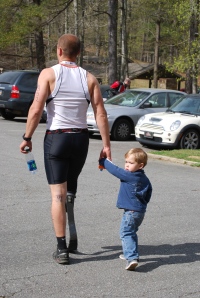 I had a chance recently to sit down with Joe, his wife Kimberly, and their two sons to talk about life, service, family, triathlon, and his forth coming book “Back in the Fight”. I was honored to meet them and inspired by their courage. I hope you are too.

What inspired you to become a soldier?

I didn’t want to sit in a college classroom and thought the military was a good way to be outside for a living.

How did you get involved in triathlon?

Post amputation in 2007 I wanted to find a way to stay active duty as a Ranger. I found out that I could run with my prosthetic. The Challenged Athletes Foundation (CAF) contacted me through a program called Operation Rebound and asked me if I would be interested in doing the 10k portion of a triathlon in in Minneapolis, MN. After doing that relay I got interested in cycling, so I started riding as well. I had no idea how to swim though. I’m still working on that part.

Tell us about your family.

As a soldier and a triathlete, how does Kim help you pursue your triathlon goals?

She’s the key to the whole thing really. Without her none of this would be possible. She gives me the time to train. She prepares my meals and really helps me on the nutrition aspects of being an athlete. 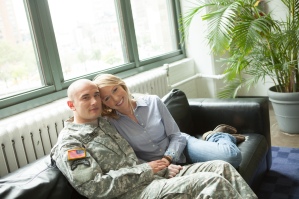 When do you train?

I do a lot of running for PT as a Ranger, so it’s part of my job. I also train in the evenings. We have a double stroller for the boys, so I put them in there and do some additional running that way. We also have a bike trailer, so I pull the boys behind me on the bike a lot on the weekends.

What don’t we know about “challenged athletes”?

The adversity they’ve overcome. Triathlon is hard enough as it is. Most people don’t notice the little stuff an amputee does in order to compete in the sport. Transitions are harder. It’s challenging getting from the swim to T1. I put on a cycling leg to ride. In T2 I switch legs for the run. So practical things like that make it a little more challenging. Nevermind the challenges just to get to the starting line.

Tell us about the various charities that you and Kim are involved with.

Operation One Voice is a non-profit that supports the immediate needs of children and families of fallen and wounded Special Operations soldiers.  We first met this group when they organized an angel flight to get me home after having my leg amputated in Virginia.  Since that first interaction, this organization has accepted the Kap’s as their own family.  Each year, I participate in their 560 mile relay run from Duluth, GA Tampa, Fla.  This relay is put on to raise awareness for the soldiers and families who have given so much to our country.

No Greater Sacrifice awarded me with the “Freedom Award” in 2011. I am the first enlisted soldier to receive this award.  Since receiving the award, I have run (and won my division) in the Army 10-Miler for the NGS Endurance Team.

Challenged Athletes Foundation has supported me through my rehabilitation.  I have run several races for them to include a relay team for the CapTex Tri, Chicago Triathlon and the New York Urbanathalon.

Our two year old son, Cody, was diagnosed with Autism a year ago.  Whenever we have a chance, we strive to raise awareness and funds in hopes that research and legislation can help to find some answers to this condition. Both Kim and myself log “charity miles” for Autism speaks whenever we run or bike.  We have recently sent a check to Autism speaks for a fundraiser that we held in our community.

As a father, what do you hope your kids will remember about their father’s dedication to serving others?

I hope my kids remember that I enjoyed it.  I like to help people set goals and realize that with hard work they can accomplish more than they think.

What advice do you have for people who are facing adversity in their life?

What does a perfect day look like in your world?

Wake up early and watch the sun rise as I run.  Make blueberry pancakes for the families breakfast.  Play with the boys outside and enjoy nature.  Weight train in the late afternoon and eat pizza for dinner.  Watch a movie until the boys fall asleep.

Name something you’re passionate about other than your career and family.

I love hunting.  I enjoy being in the woods when the sun rises and the beauty of nature.  I like the challenge of hunting and enjoy the rewards in cooking a backstrap or breast.

What sorts of music do you enjoy?

I enjoy all types of music depending on what mood I am in.  I like country and classic rock when doing cardio workouts and modern rock when I lift weights.

If your life were turned into a movie what song would play as the closing credits? 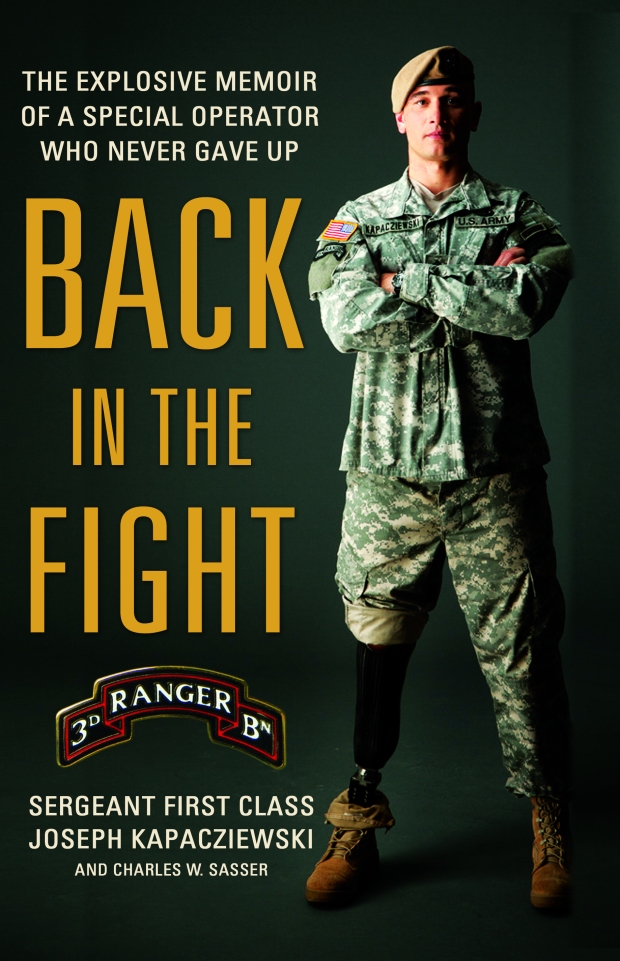 I hope you kids enjoyed reading about Joe “Kap”. Life is indeed about serving others. Joe and his family are one of the best examples of that I have ever had the pleasure of meeting.

More on Joe Kap on this blog HERE.

ps. See that “Twitter” and “Facebook” button below….tweet this interview or share it on Facebook (make sure you tag me)  for a chance to win 1 of 5 copies of “Back in the Fight” from Joe’s publisher St. Martin’s Press