This is not a Fugazi tshirt 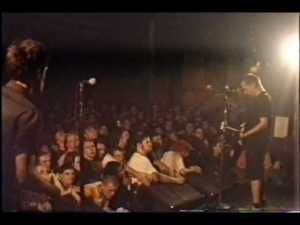 A few days ago a friend sent me a link to a video of a concert:

I was there. In the middle – sometimes at the front – of the sweaty, shirtless, mohawked, shaved headed, seething mass of angst and uncertainty and desperation about middle class upbringing. With no fear of tomorrow. And no knowledge that age and children and what we own would someday be real.

I must have watched the video a dozen times in row, looking for my 17 year old face in the crowd. I haven’t found it yet. But I know it’s there. Still.

My friend who sent me the link is a successful lawyer, another friend who was with me is a CEO, another travels the globe in a van with wife and sons. They’re still there too.

Strange how fast time moves – it was yesterday.

This weekend we went to a wedding out in the country. We listened to country music, you kids ran in the field, pushed dump trucks full rocks around. Funny to be the same guy who went to Fugazi in 1993 – and to be so different all at once.

The same night a teenage cashier at Kroger asked me out of the blue: “What about you man (I hate when kids call me “man”)? You ever listen to heavy stuff?”

I smiled and said “Yeah, I guess. I grew up on some heavy stuff.”

He looked at me like I had two heads – completely lost in the conversation. “Uh, cool,” he muttered.

Times change. The past never does. The moment is here. But for a few minutes I can close my eyes and be back in the middle of of the pit at Fugazi. I’m happy as 40 draws near. Glad that I knew nights like this one in the spring of 1993.

just hanging out in the ironman suit.

Glad my present looks like kids running around in the country at a family wedding.

One thought on “This is not a Fugazi tshirt”